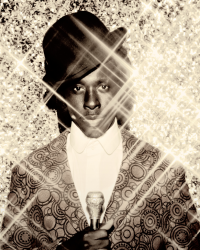 He’ll be back on the Paris scene on October 5th at the Olympia, a unique show not to be missed!