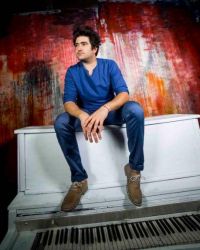 The talented Cuban pianist Harold Lopez-Nussa has just released his latest album, EL VIAJE, under the American label Mack Avenue. This album was influenced by Cuban but also African musics, thanks to the collaboration with Alune Wade, a Senegalese bassist and singer.

Discover a teaser of the album here: https://www.youtube.com/watch?v=2ed9iKMtwP0

Harold Lopez-Nussa will present his new songs on November 30 at the New Morning in Paris.

Harold Lopez Nussa’s album was featured in the Jazz News magazine which devoted a few pages to a portrait of the pianist. “The songs have been composed and arranged by Harold himself, who proves once again he is a unique instrumentalist and a respectable composer.” JAZZ NEWS