New album “Carib” out now !
In a deeply personal journey, Grammy Award winning saxophonist David Sánchez uses a modern context to explore the relationships between the West African drum and traditional melodies from his native Puerto Rico and Haiti. Afro-Puerto Rican rhythms and dances such as Bomba Yuba, Sica and seis corrido, with Haitian Petwo, Salongo and Rara have all been solid sources of inspiration to all of the original compositions in this project.

It’s a sonic story that interweaves the colors and textures of the Caribbean, the rhythms from West Africa and the soul of Jazz. Bomba, music developed by African descendants in Puerto Rico, is a key component that connects the country’s culture with others in the Caribbean and the Americas through music and dance.

The project is an infusion of ancient African rhythms into thoroughly modern compositions – all within a jazz syntax. David says, “All the original compositions in the recording have been inspired by tradi- tional melodies and rhythms from Puerto Rico and Haiti. I decided to concentrate on these musical traditions, because it still amazes me the similarities in the musical flow of both cultures. Especially the simi- larities between Bomba variations and the Congo-Guinee tradition from Haiti, have been a solid source of inspiration. The diaspora in the Caribbean feels to me like a big river, flowing and changing its formation across various lands but still one watercourse”.

Sánchez is one of the pioneers of blending Afro-Puerto Rican music with jazz vernacular. His Grammy award nominated recording, “Melaza” (2000) has been one of the most influential albums of the new millennium and has helped change the direction of Afro-Latin American music fused with Jazz. “Carib” is one of his most signifi- cant and anticipated albums because it delivers a similar resonance, but Sánchez takes a deeper dive into the Afro-Caribbean musical linage and its shared history with other Pan-African music cultures, including American Jazz tradition.

Sánchez says, “I have always felt the interconnectivity between musical genres throughout the Americas, genres like Blues, Jazz, Reggae, Rumba, Gospel, Bomba, Rock, Hip-Hop and many others.” 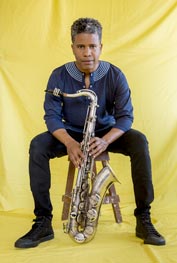